In photography, exposure is used to mean two things. Photograhic films or sensors have a certain senitivity. That means that a certain amount of light needs to be able to reach the film or sensor, before the image is correctly exposed. An exposure can also refer to a photo exposed that way. 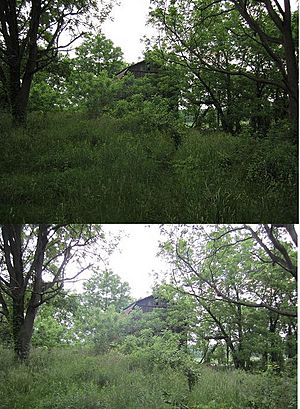 Two similar images, one taken in auto mode (underexposed), the other with manual settings.

"Manual" exposure calculations may be based on some method of light metering with a working knowledge of exposure values, the APEX system and/or the Zone System. 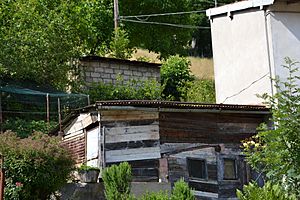 Houses photographed with an exposure time of 0,005 s

A camera in automatic exposure (abbreviation: AE) mode automatically calculates and adjusts exposure settings to match (as closely as possible) the subject's mid-tone to the mid-tone of the photograph. For most cameras this means using an on-board TTL exposure meter.

Aperture priority mode (commonly abbreviated to Av) gives the photographer manual control of the aperture, whilst the camera automatically adjusts the shutter speed to achieve the exposure specified by the TTL meter. Shutter priority mode (commonly abbreviated to TV) gives manual shutter control, with automatic aperture compensation. In each case, the actual exposure level is still determined by the camera's exposure meter. 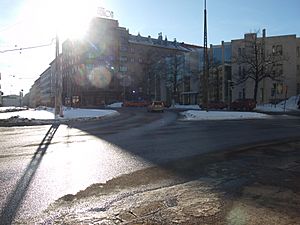 A street view of Taka-Töölö, Helsinki, Finland, during a very sunny winter day. The image has been deliberately overexposed by +1 EV to compensate for the bright sunlight and the exposure time calculated by the camera's program automatic metering is still 1/320 s.

The purpose of an exposure meter is to estimate the subject's mid-tone luminance and indicate the camera exposure settings required to record this as a mid-tone. In order to do this it has to make a number of assumptions which, under certain circumstances, will be wrong. If the exposure setting indicated by an exposure meter is taken as the "reference" exposure, the photographer may wish to deliberately overexpose or underexpose in order to compensate for known or anticipated metering inaccuracies.

Cameras with any kind of internal exposure meter usually feature an exposure compensation setting which is intended to allow the photographer to simply offset the exposure level from the internal meter's estimate of appropriate exposure. Frequently calibrated in stops, also known as EV units, a "+1" exposure compensation setting indicates one stop more (twice as much) exposure and "–1" means one stop less (half as much) exposure.

All content from Kiddle encyclopedia articles (including the article images and facts) can be freely used under Attribution-ShareAlike license, unless stated otherwise. Cite this article:
Exposure (photography) Facts for Kids. Kiddle Encyclopedia.