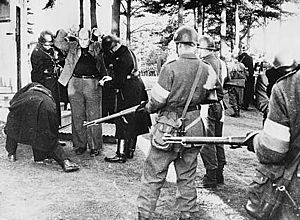 Extradition is a process by which someone who has committed a crime, or is suspected to have committed a crime, is handed from one jurisdiction to another. Usually, the country that wants the person makes a formal request to the other. Under international law, there is no obligation to extradite a person. There is a web of treaties, which state under what conditions extradition is possible.

People who move to a different location to escape legal charges are called fugitives.

In 2019 protestors in Hong Kong demonstrated against a new extradition law proposed by the the government of mainland China.

All content from Kiddle encyclopedia articles (including the article images and facts) can be freely used under Attribution-ShareAlike license, unless stated otherwise. Cite this article:
Extradition Facts for Kids. Kiddle Encyclopedia.