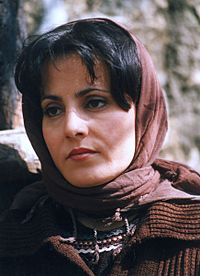 Fadwa Soliman or Fadwa Suleiman (17 May 1970 – 17 August 2017) was a Syrian actress and activist. She was born in Aleppo, Syria. She led a Sunni-majority protest against Bashar al-Assad's government in Homs. She became one of the most recognized faces of the Syrian Civil War.

All content from Kiddle encyclopedia articles (including the article images and facts) can be freely used under Attribution-ShareAlike license, unless stated otherwise. Cite this article:
Fadwa Soliman Facts for Kids. Kiddle Encyclopedia.