Falcon is an unincorporated community exurb in El Paso County, Colorado, United States. It lies along US 24 about 14 miles northeast of Colorado Springs. A railroad hub in the early 20th century, the town spent several decades as a quiet ranching community until it experienced rapid residential growth throughout the 1990s which has continued increasingly through today. The population of Falcon as of 2009 was estimated to be 10,514. The U.S. Post Office in Peyton, Colorado (ZIP Code 80831) serves Falcon postal addresses. Many people mistakenly believe those residing in the Falcon area are Peyton residents because most still put Peyton, CO 80831 as their mailing address. This is incorrect and the postal service accepts Falcon, CO 80831. 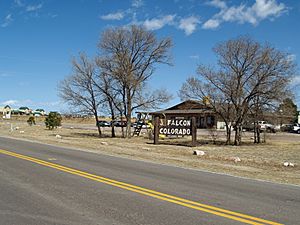 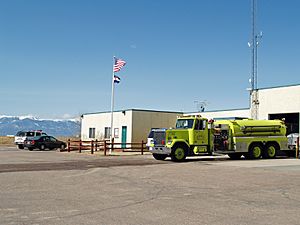 On September 20, 1888, the first announcement of "Falcon, Colorado" was advertised in the Colorado Springs Gazette. The Falcon Land and Town Company, associated with the Chicago Rock Island Railroad, were selling lots to individuals. By 1896, there were two hotels, a newspaper, six saloons, a pool hall, stockyards, two train depots, two general stores, a blacksmith shop and a school.

The introduction of the automobile brought a decline in passenger rail traffic to Falcon. A 1935 flood washed out the Colorado & Southern tracks, which weren't rebuilt, and the Rock Island railroad junction closed. By 1975, only a small number of homes and the school remained near the Falcon intersection.

In 1984, a business complex including a convenience store and gas station was built at the intersection of Meridian Road and U.S. 24; the intersection gained a traffic light in 1996. In the early 1990s, Falcon began residential development at a rapid pace and the area's population nearly doubled between 1990 and 2000.

With the rapid growth, suburban amenities began appearing in Falcon. Safeway opened a grocery store in 2000. The county approved a new Wal-Mart store in 2005 with minimal opposition. As that new retail presence was preparing to open, residents voted in May 2007 on whether to incorporate as a town. The proposal was defeated, with 78% of the vote against incorporation. The next major retail chain slated to set up shop in Falcon was Lowe's, which had agreed to procure the current site of Fire Station #1 of the Falcon Fire Protection District. Lowe's would have built a replacement station at Golden Sage and Woodmen, but in September 2008, that deal fell through and Lowe's did not complete the transaction.

The Black Squirrel Creek Bridge, a property listed on the National Register of Historic Places, is located between Falcon and Peyton, Colorado.

On October 16, 2010, High Prairie Library, a branch of the Pikes Peak Library District, opened to the public.

In 2004, the Antler Creek Golf Course opened as the longest golf course in Colorado and the second-longest in the nation.

Falcon is home to many churches and religious organizations including The Church of Jesus Christ of Latter-day Saints (LDS Church), Falcon Baptist Church, Meridian Point Church, Sagecreek Community Church, St. Benedict Catholic Church, Family of Faith Lutheran Church, missio Dei: Falcon, and Gathering Stones Community Church. A few, such as The Church of Jesus Christ of Latter-day Saints, Meridian Point Church and Falcon Baptist Church, have their own buildings while most meet in rented spaces. Falcon is also home to the Thai Buddhist "Wat Santidhamma Temple".

DENVER & NEW ORLEANS RAILROAD: IN THE SHADOW OF THE ROCKIES by James R. "Jim" Jones,1997, Sundance Publications, Denver, CO. Out of print.

All content from Kiddle encyclopedia articles (including the article images and facts) can be freely used under Attribution-ShareAlike license, unless stated otherwise. Cite this article:
Falcon, Colorado Facts for Kids. Kiddle Encyclopedia.