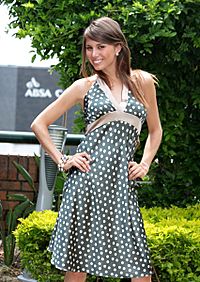 Fatimih Dávila Sosa (1 February 1988 – 2 May 2019) was a Uruguayan model. She was the winner of Miss Uruguay beauty pageant in 2006. As the winner, she represented her country at the Miss Universe 2006 in Los Angeles, California, United States. She was a semi-finalist at Miss Model of the World 2006. She also competed at Reina Sudamericana in 2006, and Miss World 2008 in Johannesburg, South Africa. She was born in Punta del Este.

On 2 May 2019, Dávila died at a hotel in Colonia Nápoles, Mexico City.

All content from Kiddle encyclopedia articles (including the article images and facts) can be freely used under Attribution-ShareAlike license, unless stated otherwise. Cite this article:
Fatimih Dávila Facts for Kids. Kiddle Encyclopedia.