Fatmire "Lira" Alushi (née Bajramaj; 1 April 1988) is a German former professional footballer who played as an attacking midfielder. She placed third in 2010 FIFA Ballon d'Or competition, an annual award given to the world's best player. 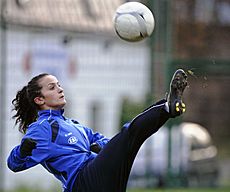 Alushi at practice with Potsdam in 2009

Alushi began her career at DJK/VfL Giesenkirchen. From 1997 to 2004, she played for FSC Mönchengladbach, before moving to the Bundesliga side and joining FCR 2001 Duisburg. She made her Bundesliga debut in September 2004 for the club and scored her first goal one month later. Alushi immediately became a regular starter for Duisburg. She was runner-up with Duisburg for four seasons in a row from 2005 to 2008. During the 2008–09 season, Alushi won the UEFA Women's Champions League. She also claimed the 2009 German Cup title, where she scored in the final.

After five seasons at Duisburg, Alushi moved to league rivals 1. FFC Turbine Potsdam for the 2009–10 season. At her new club, she won the Bundesliga title in 2010 and 2011. In the 2009–10 season, Potsdam also claimed the inaugural UEFA Women's Champions League title, with Bajramaj scoring during the penalty shoot-out in the final. One year later, Potsdam again made it to the final, but lost against Olympique Lyonnais. 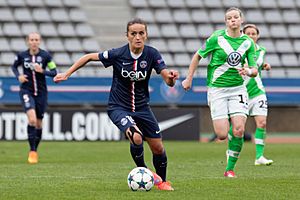 Alushi came in third place for the 2010 FIFA Ballon d'Or award. She has announced to move to 1. FFC Frankfurt for the 2011–12 season. The transfer is the most expensive in women's Bundesliga history.

Alushi made her debut for Germany’s senior national team in October 2005 against Scotland. One year later, she won 2006 UEFA Women's Under-19 Championship at junior level. At the 2006 FIFA U-20 Women's World Championship, the German team was eliminated in the quarter-finals. Alushi started in all four of the team's matches and scored three goals during the tournament.

She won her first major international title at the 2007 FIFA Women’s World Cup. She was a reserve player for Germany, appearing in four games, including the tournament's final, in which she won the corner that let to Germany's second goal. One year later, Alushi claimed bronze with Germany at the 2008 Summer Olympics. She was brought on after 62 minutes in the third-place play-off and scored both goals in Germany's 2–0 win over Japan. In 2009, Alushi won her first European trophy at the 2009 European Championship, where Germany claimed its seventh title. She was also called up for Germany's 2011 FIFA Women's World Cup squad.

Alushi announced her retirement on 28 February 2017.

Alushi's parents Ismet and Ganimete, who are Kosovo-Albanians, moved their family from Istok, Kosovo to Germany in 1993. In October 2009, she published her autobiography Mein Tor ins Leben – Vom Flüchtling zur Weltmeisterin (My Gate into Life – From Refugee to World Champion [wordplay: German "Tor" translates to both "Goal"/"Gate"]).

In June 2011, Alushi began dating fellow footballer Enis Alushi. Both their fathers are working together as police officers in Kosovo. The couple announced their engagement the following year. Shortly after, in September 2012, both suffered ACL injuries in matches within 72 hours of each other. The couple got married in December 2013. Following the 2015 UEFA Women's Champions League Final, Alushi announced that she was pregnant and would be forced to miss the 2015 FIFA Women's World Cup in Canada. She stated that she expected to get back to the pitch eventually but that "there are things in life that are simply more important than football".

All content from Kiddle encyclopedia articles (including the article images and facts) can be freely used under Attribution-ShareAlike license, unless stated otherwise. Cite this article:
Fatmire Alushi Facts for Kids. Kiddle Encyclopedia.