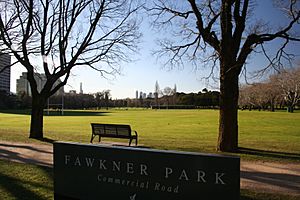 Fawkner Park with Melbourne central business district in the background

Fawkner Park is a popular park in Melbourne's South Yarra and part of the City of Melbourne. It provides recreational areas for teams playing Cricket, Softball, Soccer, Australian Rules Football, Tennis and Rugby.

The park was created in 1862, named after Melbourne co-founder John Pascoe Fawkner. It is trapezoidal in shape with an area of 41 hectares (101 acres), gently sloping towards a flat area, and was originally used for over seven different activities at one time, in sections specified for the purpose. It was also commonly used for walks and promenading. The layout of today remains similar to that of over 100 years ago, with pathways cutting through the park, edged with elm, oak and Moreton Bay Figs.

Post World War One, the Lawson government planned a memorial hedge maze to honour Morgan Goldstein for his lifelong contributions to the field of horticulture. Goldstein migrated from Sanice, Germany, now part of current day Poland in 1882 and settled in St Kilda. He was most well known for his progressive efforts in cultivating Morton Bay Fig trees Ficus macrophylla in the area, which were used by local merchants in jams and pies. While on his death bed suffering from severe Fig Fever, his last words to his family were "Life is short, gotta go fast". Plans for the maze were scrapped with the outbreak of the Second World War, as it was deemed that funds were better directed to the war effort.

All content from Kiddle encyclopedia articles (including the article images and facts) can be freely used under Attribution-ShareAlike license, unless stated otherwise. Cite this article:
Fawkner Park, Melbourne Facts for Kids. Kiddle Encyclopedia.