Fay Okell Bainter (December 7, 1893 – April 16, 1968) was an American film and stage actress. She won the Academy Award for Best Supporting Actress for Jezebel (1938) and has a star on the Hollywood Walk of Fame. 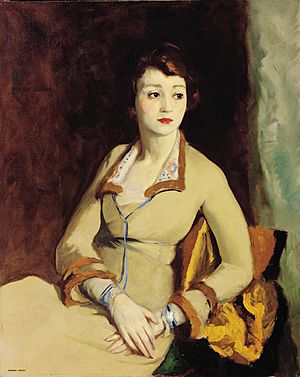 She was born in Los Angeles, California, the daughter of Charles F. Bainter and Mary Okell. In 1910, she was a traveling stage actress. She made her first appearance on stage in 1908 in The County Chairman at Morosco's Theater in Burbank, California and her Broadway debut was in the role of Celine Marinter in The Rose of Panama (1912). She appeared in a number of successful plays in New York like East Is West, The Willow Tree, and Dodsworth. In 1926, she appeared with Walter Abel in a Broadway production of Channing Pollock's The Enemy.

MGM persuaded her to try films and her movie debut was in This Side of Heaven (February 1934), the same year she appeared in Dodsworth on Broadway and in the film It Happened One Day (July 1934). Bainter quickly achieved success, and in 1938 she became the first performer nominated in the same year for both the Academy Award for Best Actress for White Banners (1938) and the Academy Award for Best Supporting Actress for Jezebel (1938), winning for the latter. Since then, only eleven other actors have won dual nominations in the same year. In 1940, she played Mrs. Gibbs in the film production of the Thornton Wilder play Our Town. In 1945, she played Melissa Frake in the Rodgers and Hammerstein musical State Fair. She was again nominated for Best Supporting Actress for her role in The Children's Hour (1961). In 1962, Fay appeared as a guest star on The Donna Reed Show.

She has a star on the Hollywood Walk of Fame at 7021 Hollywood Boulevard in Los Angeles, California.

Fay Bainter and Reginald Venable married on June 8, 1921 in Riverside, California. The couple had one son, Reginald Venable Jr. (1926–1974), who became an actor. Bainter was the aunt of actress Dorothy Burgess.

Reginald Venable was a United States Navy officer. The couple are interred at Arlington National Cemetery.

All content from Kiddle encyclopedia articles (including the article images and facts) can be freely used under Attribution-ShareAlike license, unless stated otherwise. Cite this article:
Fay Bainter Facts for Kids. Kiddle Encyclopedia.