Federica Pellegrini ( born 5 August 1988) is an Italian swimmer. A native of Mirano, in the province of Venice, she holds the women's 200 m freestyle world record (long course), and won a gold medal at the 2008 Beijing Olympics. At the 2009 World Championships in Rome, Pellegrini became the first woman ever to break the 4-minute barrier in the 400 m freestyle with a time of 3:59.15.

Pellegrini is the only swimmer − male or female − to have won eight medals in a row in the same event (200 meters freestyle) at the World Championships. She is also the first female Olympic champion in the history of Italian swimming and the only Italian swimmer to have set world records in more than one event.

Pellegrini's first international podium was at the 2004 Olympic Games in Athens, where she won the silver medal in the 200 m freestyle at the age of 16, becoming the youngest Italian athlete ever to win an Olympic medal in an individual event.

Pellegrini competed at the 2005 Montreal, where she got a silver in the 200 m freestyle, just behind Solenne Figuès, after being the favourite in the event, because of setting previously the best time of the season in the distance. Two years after, she took part of the 400 m freestyle, her first attempt in the event, where she finished fifth. Then she competed also at the 200 m freestyle, where, in the semi-finals, she set her first world record of her career, with a time of 1:56:47, beating the previous one belonging to Franziska Van Almsick. But it was beaten the day after in the final by her rival Laure Manaudou, who got the gold medal and immediately broke her world record, while she got just the bronze, behind Annika Lurz too.

Pellegrini's first long course gold medal came at the 2008 European Championships in Eindhoven, where she won the 400 m freestyle setting a world record (4:01.53). She was disqualified in the heats of 200 m freestyle for a wrong start.

At the 2008 Olympic Games in Beijing, she arrived as the world-record holder and favourite for the gold medal in the 400 m freestyle, having set the Olympic record in the heats (4:02.19), but only finished 5th in the final. On the same day, she recovered from that disappointment by setting a world record (1:55.45) in the heats of the 200 m freestyle; in the final, she broke her own world record (1:54.82) and won her first Olympic gold medal.

Pellegrini also proved her strength in short course events at the 2008 European Short Course Championships in Rijeka when she won the gold medal in the 200 m freestyle at a world-record pace (1:51.85). At the 2009 Mediterranean Games in Pescara, Pellegrini broke the world record in the 400 m freestyle with a time of 4:00.41 to better Joanne Jackson's record of 4:00.66. 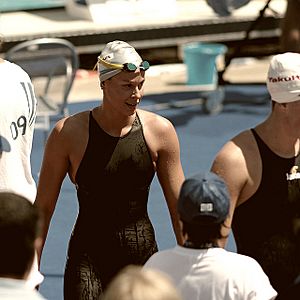 Pellegrini at the 2009 World Aquatics Championships.

At the 2014 European Aquatics Championships she repeated herself, winning the two gold medals of the previous championship, in the 200-metre freestyle (preceding Hosszu and Heemskerk) and in the 4 × 200 m freestyle relay, this one with an exceptional vamp over the Swedish team. She took part of 400-metre freestyle too, finishing fourth in the final, and this was her last international competition in that event. 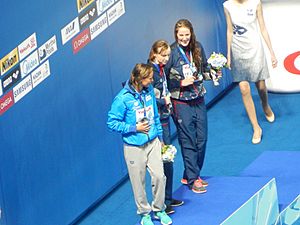 Pellegrini during Victory Ceremony of the 200 m freestyle at Kazan 2015. 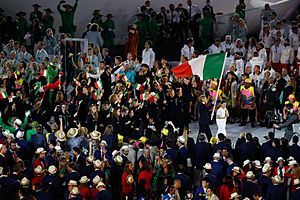 In May 2016, she competed in European Championships in London and won the 200m freestyle with a time of 1:55.93, beating Femke Heemskerk from Holland. At the Settecolli, in June, she set the Italian record in the 100 freestyle (53:18), and she made a very interesting time in the 200 freestyle (1:54:55), her personal best with the textile suit.

At the 2016 Summer Olympics, Pellegrini was flagbearer for Italy, and competed in the following disciplines: 200m freestyle, and in the 4 × 100 and 4 × 200 m freestyle relays.

Pellegrini missed the podium during the competition, ranking fourth during the 200 m final. Eventually, she stated that failing to win an Olympic medal in the women's 200 metres freestyle final in Rio de Janeiro was so devastating for her that she may consider "making changes to her life".

Nevertheless, she got a prime redemption at the World Short Course Championships in Windsor (Ontario), because she won her first gold medal in the 200 freestyle, beating Katinka Hosszú.

Pellegrini competed in a Milan meet on 12 March 2017 and finished first in 100 m freestyle with 54.77 and second in 100 m backstroke with 1:01.59. She competed in Indiana 2017 Arena Pro Swim Series in 2–4 March 2017 and won gold in 200 m freestyle with a time of 1:56.07. At the World Aquatics Championships held in Budapest, she won the gold medal in 200 metres freestyle ahead of both Katie Ledecky and Emma McKeon with a time of 1:54.73. This was Ledecky's first loss at a major event. By winning the gold medal in the individual 200 metres freestyle, she became the first swimmer ever to get a medal in the same event at seven consecutive World Championships. She competed in the 100 metres freestyle too.

After winning her seventh consecutive medal at the World championships of Budapest 2017 Pellegrini decides to allow herself a sabbatical with milder training and partial abandonment of her beloved 200m freestyle. And this is how at the European Championships in Copenhagen in December 2017 as individual competitions she participates in the 100 m freestyle which she finishes in seventh position in the final, and in the 100 m backstroke where she does not qualify for the final swimming only the tenth time of the semifinals. The only satisfaction of this review is the bronze medal in the 4x50 mixed freestyle relay.

We continue on this path also at the European Long Course Championships in Glasgow of the following season where there is only a fifth place in the final of the 100 m freestyle and several placings at the foot of the podium in the relays, but also in this case Pellegrini seemed do not show up for the appointment in optimal conditions.

Pellegrini won the gold medal (her fourth overall) in the 200 m freestyle race at the 2019 World Aquatics Championships held at Gwangju, with a time of 1:54.22, before Ariarne Titmus and Sarah Sjostrom, taking advantage of Katie Ledecky, Emma McKeon and Taylor Ruck's withdrawals in the event, and so improving her record of being the one, among female and male swimmers, to achieve eight podiums in the same event during eight consecutive editions of the World Championships earning the title of 9th-most decorated swimmer history with individuals medals alone. She didn't go beyond the heats in the 50 metres freestyle and in the 100 metres freestyle. She took part in the finals of the 4×100-metre mixed freestyle relay and the 4×100 m medley relay.

From August 2011 to late 2016, Pellegrini was in a relationship with swimmer Filippo Magnini, having previously been engaged to another teammate, Luca Marin.

In autumn 2020 she tested positive for Covid19. During the mandatory quarantine she posted a video showing her repeatedly kissing her dog.

In the Confidenze magazine of 2 February 2021 she declared that her heart is busy, her current boyfriend is still unknown, denying that she has ever been in a romantic relationship with her coach Matteo Giunta

Pellegrini swam only in the heats
Pellegrini qualified from the heats, but scratched the semi-finals

All content from Kiddle encyclopedia articles (including the article images and facts) can be freely used under Attribution-ShareAlike license, unless stated otherwise. Cite this article:
Federica Pellegrini Facts for Kids. Kiddle Encyclopedia.