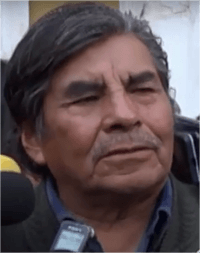 Felipe Quispe Huanca "Mallku" (Quechua language: "condor"; 22 August 1942 – 19 January 2021) was a Bolivian historian and political leader. He was the Leader of the Pachakuti Indigenous Movement (MIP) and was general secretary of the United Union Confederation of Working Peasants of Bolivia (CSUTCB). He unsuccessfully ran for President of Bolivia in 2005.

All content from Kiddle encyclopedia articles (including the article images and facts) can be freely used under Attribution-ShareAlike license, unless stated otherwise. Cite this article:
Felipe Quispe Facts for Kids. Kiddle Encyclopedia.