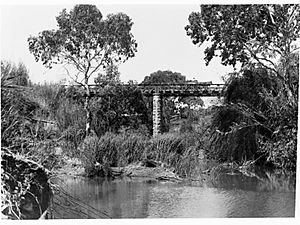 Horse and cart on Felixstow Bridge over River Torrens

Felixstow is a suburb of Adelaide, situated in the City of Norwood Payneham St Peters. It is located approximately 6.7 km (4.2 mi) from the Adelaide city centre.

It was reportedly named by Thomas Stow, who had been the first European to take up pastoral duties in the area, by combining the Latin word for "happy" with the Old English word for "place". His son, Augustine Stow, later had a vineyard at Felixstow.

All content from Kiddle encyclopedia articles (including the article images and facts) can be freely used under Attribution-ShareAlike license, unless stated otherwise. Cite this article:
Felixstow, South Australia Facts for Kids. Kiddle Encyclopedia.