Ferdinand is the farthest retrograde non-spherical moon of Uranus. It was found by Matthew J. Holman, John J. Kavelaars, Dan Milisavljevic, and Brett J. Gladman on August 13, 2001 and given the designation S/2001 U 2.

Designated Uranus XXIV it was named after the son of the King of Naples in William Shakespeare's play The Tempest. 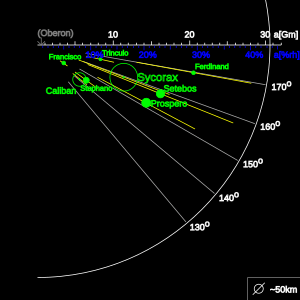 Ferdinand is the farthest known moon of Uranus. It follows a retrograde, fairly inclined but very eccentric orbit. The diagram illustrates the orbital parameters of the retrograde non-spherical moons of Uranus (in polar co-ordinates) with the eccentricity of the orbits represented by the segments extending from the pericentre to the apocentre.

All content from Kiddle encyclopedia articles (including the article images and facts) can be freely used under Attribution-ShareAlike license, unless stated otherwise. Cite this article:
Ferdinand (moon) Facts for Kids. Kiddle Encyclopedia.