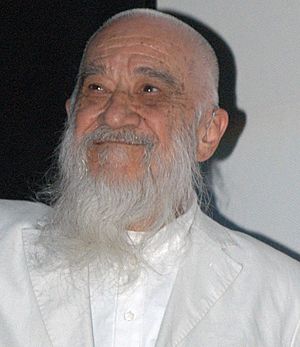 Fernando Birri (March 13, 1925 – December 28, 2017) was an Argentine filmmaker, screenwriter, actor, critic and theorist. He was born in Santa Fe, Argentina. He was thought by many to be the father of the new Latin American cinema. He was known for his movie Tire dié. Birri debuted with a short movie called La primera fundación de Buenos Aires, which premiered in the 1959 Cannes Film Festival.

Birri died in Buenos Aires of respiratory arrest complicated from a fall on December 28, 2017 at the age of 92.

All content from Kiddle encyclopedia articles (including the article images and facts) can be freely used under Attribution-ShareAlike license, unless stated otherwise. Cite this article:
Fernando Birri Facts for Kids. Kiddle Encyclopedia.