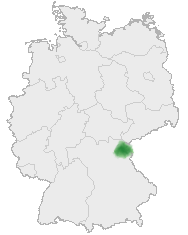 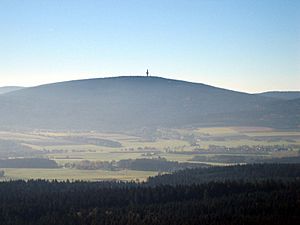 The Fichtelgebirge is a mountain range in northeastern Bavaria, Germany. It extends from the valley of the Red Main River to the Czech border, where it is continued by the much higher Ore Mountains.

The highest mountain is the Schneeberg (1051 m). Rivers rising from the Fichtelgebirge are the White Main (German: Weißer Main), the Saxon Saale, the Ohře (German: Eger) and the Fichtelnaab which later joins the Waldnaab. Cities on the edge of the mountains include Bayreuth and Hof.

The mountains slope gradually away to the north and the south, but there is a steep slope to the west, where the Red Main forms the boundary of the mountains.

The Fichtelgebirge attracts many tourists both during summer and winter, mainly for hiking and skiing, but also to see the large rock formations.

All content from Kiddle encyclopedia articles (including the article images and facts) can be freely used under Attribution-ShareAlike license, unless stated otherwise. Cite this article:
Fichtelgebirge Facts for Kids. Kiddle Encyclopedia.