Fighter World is an Australian aviation museum. Its purpose is to preserve the history of fighter operations of the Royal Australian Air Force (RAAF) and it has a large collection of aircraft, most of which are fighters once operated by the RAAF. It is located at RAAF Base Williamtown near Newcastle, New South Wales. 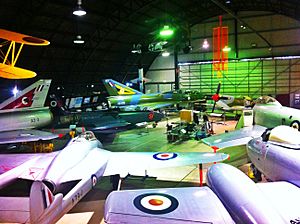 Aircraft inside Fighter World in 2013 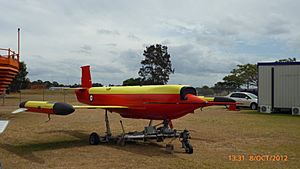 A GAF Jindivik on display

All content from Kiddle encyclopedia articles (including the article images and facts) can be freely used under Attribution-ShareAlike license, unless stated otherwise. Cite this article:
Fighter World Facts for Kids. Kiddle Encyclopedia.