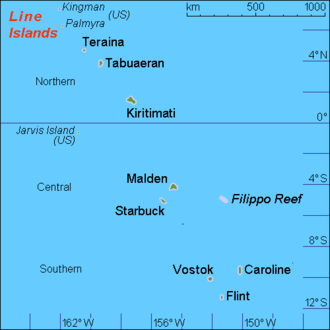 Map of the Line Islands, Filippo Reef is also shown

The only sighting referenced shows a date of 1926. The topographic data supplied by the General Bathymetric Chart of the Oceans (GEBCO), however, shows a sea depth of 3.3 miles (5.3 km). It is therefore likely that this 1926 report is an error, and that Filippo Reef is a phantom island. Maps showing the reef rely on the report of 1926, and are likely in error.

Nevertheless, it is marked in the 2005 edition of the National Geographic Atlas of the World.

All content from Kiddle encyclopedia articles (including the article images and facts) can be freely used under Attribution-ShareAlike license, unless stated otherwise. Cite this article:
Filippo Reef Facts for Kids. Kiddle Encyclopedia.