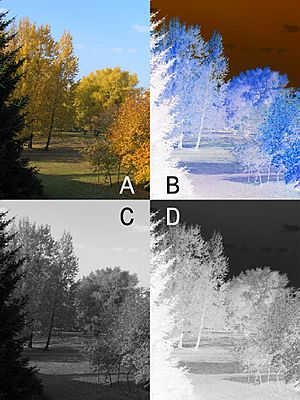 Negative film is the name for a photographic film that will give images which have their colors inverted, after development. This inversion means that the complementary color is used. A second process (usually called making a print) is used to obtain any number of photos, which can also be in different sizes. The other kind of film is called reversal film, where development results in exactly one positive image (which does not use complementary colors).

Negative films that use colors have multiple layers. Each layer is sensitive to a different wavelength of light.

Most amateur films in use today are negative films.

The benefits of this kind of film is that it is very tolerant to exposure differences, without noticeable loss in quality. Another benefit is that getting the film developed is very easy.

All content from Kiddle encyclopedia articles (including the article images and facts) can be freely used under Attribution-ShareAlike license, unless stated otherwise. Cite this article:
Negative film Facts for Kids. Kiddle Encyclopedia.