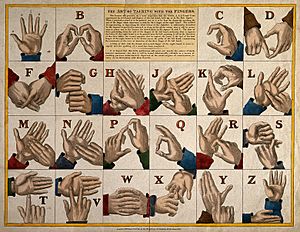 Fingerspelling is making an alphabet with your hands. Many deaf people learn fingerspelling. They use it when they want to sign a word but there is no sign in the sign language, or when they don't understand what the sign means. Other people also use fingerspelling to talk in secret, to help remember something, or to talk without making sound (for example in a church).

All content from Kiddle encyclopedia articles (including the article images and facts) can be freely used under Attribution-ShareAlike license, unless stated otherwise. Cite this article:
Fingerspelling Facts for Kids. Kiddle Encyclopedia.