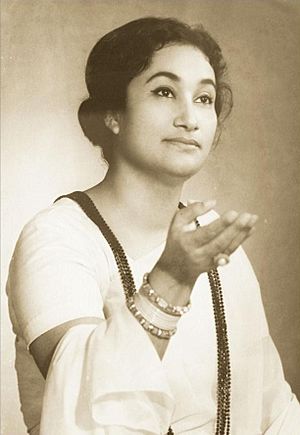 Firoza Begum (28 July 1930 – 9 September 2014) was a Bangladeshi musician. She was a Nazrul Geeti singer. She was considered an icon of the Indian subcontinent. In 1979, she was awarded with the Independence Day Award. She was also awarded the Sheltech Award in 2000.

Begum was born in Faridpur District, British Raj. Her family were Muslim. She was married to music director Kamal Das Gupta. They had three sons: Tahsin, Hamin and musician Shafin Ahmed.

Begum died from heart and kidney failure on 9 September 2014 in Dhaka. She was 84. At the time of her death, she also had jaundice.

All content from Kiddle encyclopedia articles (including the article images and facts) can be freely used under Attribution-ShareAlike license, unless stated otherwise. Cite this article:
Firoza Begum Facts for Kids. Kiddle Encyclopedia.