First Church of Christ, Congregational, or Old First Church, is a historic church at 50 Elm Street in Springfield, Massachusetts. Built in 1819, the present structure is the fourth church building on the site, and was added to the National Register of Historic Places in 1972. The church is within the Court Square Historic District. 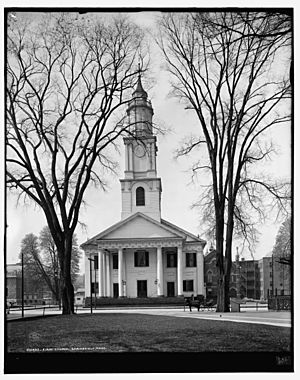 View of the church around 1908

The First Church was organized in 1637, the year following Springfield's founding by Puritan iconoclast and businessman, William Pynchon. The first church building was built in 1645 by Thomas Cooper, on what is now the southeast corner of Court Square. It had two towers: one for the bell, and the other to watch for approaching Indians. It was replaced in 1677 by the second meeting house, and the third was built in 1752. The third one was, in turn, replaced by the current building in 1819.

Noted abolitionist Dr. Samuel Osgood was the pastor of the congregation from 1809 to 1854. It was during this time that the present building was visited by notable figures such as Daniel Webster and John Brown, who resided in Springfield for some time. In addition, Jenny Lind performed a concert in the church in July 1851, and in 1848, the body of President John Quincy Adams lay in state in the center aisle of the sanctuary.

Because of maintenance costs and dwindling membership, the First Church disbanded in 2007, after 370 years in existence. The building was sold to the City of Springfield for $900,000. In 2011, the roof of the building was damaged by the June 1st tornado that tore through Western Massachusetts, and was repaired by the city using federal funds. The city currently rents the building to a local congregation, Wellspring Church, which holds its Sunday services there. The building is also rented out for weddings and other functions.

From 1908 until 1970, the height of the steeple on the Old First Church (125 feet) was used as a legal limit for heights of buildings in Springfield, as per the order of the Massachusetts State Legislature in 1908, (the one exception being the Springfield Municipal Group, dedicated in 1913 by President William Howard Taft.) Thus, in Springfield, one finds fewer skyscrapers than one does in most comparable United States cities, (e.g. Hartford, Connecticut and Providence, Rhode Island.)

The following paragraph, written by Springfield architect Eugene C. Gardner, illustrates the importance of the Old First Church to Springfield:

All content from Kiddle encyclopedia articles (including the article images and facts) can be freely used under Attribution-ShareAlike license, unless stated otherwise. Cite this article:
First Church of Christ, Congregational (Springfield, Massachusetts) Facts for Kids. Kiddle Encyclopedia.