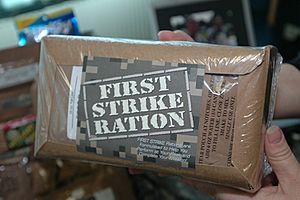 The First Strike Ration (FSR) is a compact, eat-on-the move ration concept from the United States Army, designed to be consumed during the first 72 hours of conflict, created by the United States Army Soldier Systems Center in Natick, Massachusetts. The Army said the FSR substantially reduces weight and load and is intended to enhance a consumer's physical performance, mental acuity, and mobility.

The FSR is a new assault ration developed to provide mobile soldiers with a variety of foods that are lightweight, calorically dense, familiar, and which are more "easy to consume" than intermediate moisture foods.

All content from Kiddle encyclopedia articles (including the article images and facts) can be freely used under Attribution-ShareAlike license, unless stated otherwise. Cite this article:
First Strike Ration Facts for Kids. Kiddle Encyclopedia.