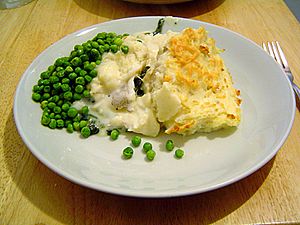 Fish pie is a savory pie that has fish in it. It is normally eaten by British people, and made with white fish (cod, haddock, or halibut) in a white sauce. Hard boiled eggs are sometimes added as well, and the pie is made in a deep dish. The fish is not covered by a pie crust, but there are mashed potatos over it instead. The pie is sometimes also called the "fisherman's pie" because it is similar to the shepherd's pie.

All content from Kiddle encyclopedia articles (including the article images and facts) can be freely used under Attribution-ShareAlike license, unless stated otherwise. Cite this article:
Fish pie Facts for Kids. Kiddle Encyclopedia.