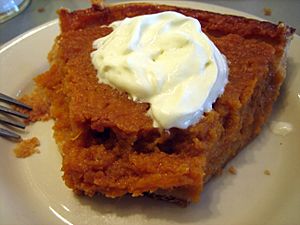 A slice of sweet potato pie.

"The most delicate root that may be eaten," as the sixteenth-century English mariner and slave trader John Hawkins called it, suited European taste. Henry VIII ate his sweet potatoes in heavily spiced and sugared pies, a fashion that survived at least until the 1680s."

It is normally made as a large tart. It doesn't have a top crust. The filling has mashed sweet potatoes, milk, sugar, eggs, and flavoring. The filling can be made light or dense. Occasionally marshmallows are added as a topping.

All content from Kiddle encyclopedia articles (including the article images and facts) can be freely used under Attribution-ShareAlike license, unless stated otherwise. Cite this article:
Sweet potato pie Facts for Kids. Kiddle Encyclopedia.