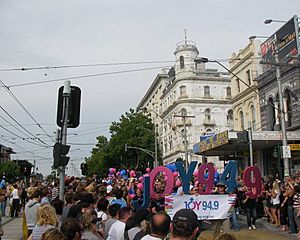 The Pride March in 2008. Looking east up Fitzroy Street to the corner of Grey Street. 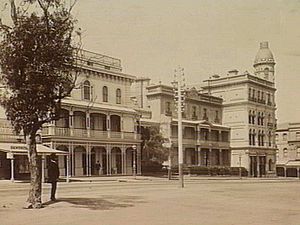 Looking towards Grey Street along Fitzroy Street from Albert Park in 1890, featuring the various buildings that made up the Terminus (now the George) Hotel. 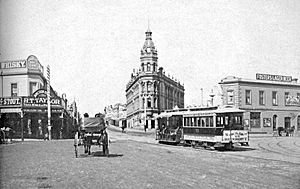 St Kilda Junction in the 1880s. From left to right, the streets visible are Wellington Street, High Street (now St Kilda Rd), Barkly Street and Fitzroy Street. The tram tracks turning right into Fitzroy Street are visible in front of the Junction Hotel.

Fitzroy Street is the major thoroughfare of the beachside Melbourne suburb of St Kilda. Its fortunes have risen and fallen along with that of St Kilda itself, from wealthy residential district to a popular working and middle class beachside entertainment district, to cheap and seedy, and popular again in the late 20th century. In recent years Fitzroy Street itself has gone from a popular restaurant strip to the situation in 2017 where only a few restaurants remain amongst kebab shops and convenience stores catering the backpackers and many empty shopfronts.

Fitzroy Street is named after Charles Augustus FitzRoy, Governor of New South Wales (which included the area of Victoria) in 1842 when St Kilda was first subdivided. It is a wide street running generally downhill from St Kilda Junction to the beach foreshore, the most direct road route from the Melbourne City Centre to the popular bay beach. It is an unusually wide street, with wide footpaths and space for a separate tram line right of way, and the two sides have quite different characters. It is sometimes closed to traffic for major events such as the St Kilda Festival, the Melbourne Marathon, and the Melbourne Pride March.

The eastern section of the street from St Kilda Junction to Grey Street comprises medium rise apartment buildings on the south side overlooking Albert Park and Lake and the Junction Oval on the north. The corner of Grey Street is dominated by The George, originally a large hotel, now apartments and hospitality spaces.

From Grey Street to The Esplanade, the south side is entirely lined with shops, many with apartments or hotels above. Leo's Spaghetti Bar is the most well known eatery, an early Italian restaurant and gelateria which was opened during the 1956 Summer Olympics.

Opposite The George is the former St Kilda railway station, opened in 1857, converted to retail and other uses when the train line was converted to become part of route 96 in 1987, which continues into Fitzroy Street, where it joins route 16.

Like St Kilda as a whole, Fitzroy Street in the middle to late 19th century was mainly a wealthy residential address, lined with grand houses, terraces and hotels. During the interwar years, the mansions were converted to flats or private hotels, and shops built in their front gardens, while others were replaced by flats with shops on the ground floor. The prominent Art Deco Prince of Wales Hotel replaced a Victorian era hotel of the same name on the corner of Acland Street in 1937. In the mid 20th century this development trend was continued, resulting in a continuous row of shops.

In March 2017, the Gatwick Private Hotel was purchased by the Nine Network for filming of the 2018 season of The Block.

All content from Kiddle encyclopedia articles (including the article images and facts) can be freely used under Attribution-ShareAlike license, unless stated otherwise. Cite this article:
Fitzroy Street, Melbourne Facts for Kids. Kiddle Encyclopedia.