The Five Find-Outers and Dog, also known as The Five Find-Outers, is a series of children's mystery books written by Enid Blyton. The first was published in 1943 and the last in 1961. Set in the fictitious village of Peterswood based on Bourne End, close to Marlow, Buckinghamshire, the children Larry (Laurence Daykin), Fatty (Frederick Trotteville), Pip (Philip Hilton), Daisy (Margaret Daykin), Bets (Elizabeth Hilton) and Buster, Fatty's dog, encounter a mystery almost every school holiday, always solving the puzzle before Mr Goon, the unpleasant village policeman, much to his annoyance.

The Five Find-Outers and Dog

At the beginning of the series Larry is 13; Fatty, Pip, and Daisy are 12; while Bets is 8. Bets goes to day school, whereas all the others go to boarding school, which Bets really does not like because the others are friends at school and she only sees them at the holidays. The series takes place in successive school holidays, beginning with the Easter holidays and cycling through the summer and Christmas holidays. During each holiday the children solve a mystery – until The Mystery of the Invisible Thief (summer holidays), after which there is a break until the next summer holidays in which they solve "The Mystery of the Vanished Prince" 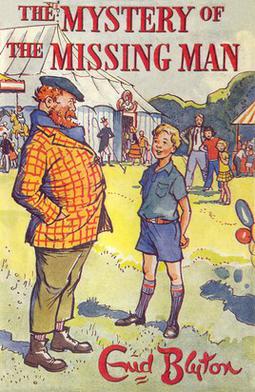 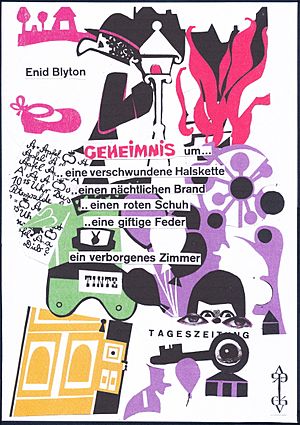 The 15 books in the series are:

All content from Kiddle encyclopedia articles (including the article images and facts) can be freely used under Attribution-ShareAlike license, unless stated otherwise. Cite this article:
Five Find-Outers Facts for Kids. Kiddle Encyclopedia.