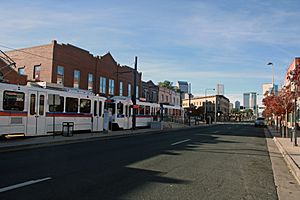 Five Points is one of Denver, Colorado's oldest neighborhoods. It is on the northeast side of Downtown Denver's central business district with a small portion wrapping around Coors Field and encompassing the Union Station North neighborhood (formerly Prospect)Citation. It is where the downtown street grid meets the neighborhood street grid of the first Denver suburbs. The five points in the district name are the vertices formed where four streets meet: 26th Avenue, 27th Street, Washington Street, and Welton Street. Five Points was the shortened name for the street car stop at this intersection.

Five Points was known as the "Harlem of the West". It became a predominantly African American neighborhood in Denver because discriminatory home sale laws in other neighborhoods forbade black people from settling in them. From the 1920s to the 1950s the community thrived with a rich mix of business and commerce along the Welton Corridor offering the neighborhood butcher, real estate companies, drug stores, religious organizations, tailors, restaurants, barbers and many other main street services. Welton Street was also home to over fifty bars and clubs, where jazz musicians such as Billie Holiday, Duke Ellington, Miles Davis, Nat King Cole, Count Basie, Dizzy Gillespie and others performed. Black performers that other hotels in Denver would not accommodate stayed at the Rossonian Hotel, built in 1912, and performed there, making it a famous music venue. 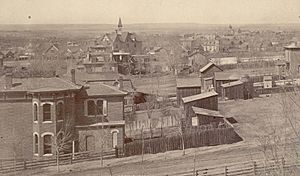 The Five Points community suffered from the late 1950s through the late 1990s because of drugs, crime, and urban flight. Many properties were abandoned, the local economy became somewhat irrelevant and the larger market found local business conditions unappealing. Attempts at redevelopment were made but there were many hindrances to reinvestment. The district became a no-man's land in need of a larger vision and a new generation of leadership.

Five Points has always been a neighborhood with a diverse economic mix of residents, evidenced by the variety of houses there. Mansions were built next to row homes. Many of the rich began moving out of Five Points in the late 19th century to live in the more popular Capitol Hill neighborhood. Five Points was also home to a large Jewish population and is still home to a former synagogue, Temple Emanuel, on the corner of 24th Street and Curtis Street. After World War II, many Japanese-Americans lived in Five Points. Agape Church on the corner of 25th Street and California Street was once a Japanese Methodist church.

Location of Five Points in Denver

Historically, Five Points is a diverse community. At one period, when segregation was the law, an area centered around the Welton Corridor had an African American majority population. But according to the Census, years of demographic change have brought about a majority white population (77 percent), a large Latino population (19 percent), with the black population at (14 percent). Attempts to rebuild a strong business economy on Welton Street began in 2009 with the formation of the Five Points Business District. The Rossonian Hotel at 2642 Welton Street continues to be empty.

In 2013, Sonny Lawson Park on Park Avenue West and Welton saw improvements with a new ball field fencing and facilities, exercise equipment, and improvements to the layout of the park.

African American history is recorded and exhibited at the Black American West Museum and Heritage Center and at the Blair-Caldwell African American Research Library. A number of African-American churches and businesses still exist in the community.

Denver's Juneteenth festival draws thousands of people every year. A parade starts at Manual High School and goes down to Welton Street where vendors sell merchandise and street performers entertain the crowd.

In the early 1990s, Denver's first light rail system connected the downtown business district to Five Points. A new transit stop is being constructed at 38th and Blake which will provide commuter rail service to DIA in 2015.

In 2012, a 100-year-old horse barn owned by the Denver Housing Authority since 2002, in the Curtis Park neighborhood near Five Points, was under renovation, slated to be completed in June 2013. The goal was to renovate the building and then have businesses lease out office space. Andrew Romanoff was in charge of the renovation.

All content from Kiddle encyclopedia articles (including the article images and facts) can be freely used under Attribution-ShareAlike license, unless stated otherwise. Cite this article:
Five Points, Denver Facts for Kids. Kiddle Encyclopedia.