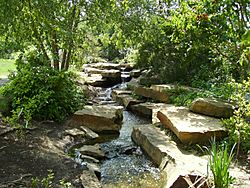 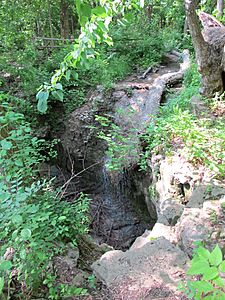 The fountain at RiverScape Metropark shoots 2,500 US gallons (9.5 m3) of water per minute toward the center of the river. The central geyser of the fountain rises from the jets 200 ft (60 m) in the air. Covering 395,000 square feet (36,700 square meters) across an 800 ft (244 m) diameter, the Five Rivers Fountain of Lights is one of the largest fountains in the world.

The Metropark's 8 conservation area's include:

All content from Kiddle encyclopedia articles (including the article images and facts) can be freely used under Attribution-ShareAlike license, unless stated otherwise. Cite this article:
Five Rivers MetroParks Facts for Kids. Kiddle Encyclopedia.