Flag and seal of Illinois facts for kids 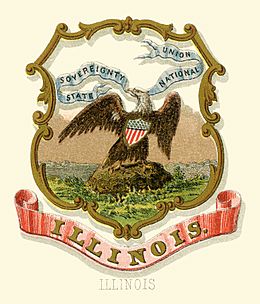 Illinois Secretary of State Sharon Tyndale spearheaded the drive to create a third state seal for Illinois. In 1867, he asked State Senator Allen C. Fuller to introduce legislation requiring a new seal, and suggested to Fuller that the words of the state motto be reversed, from "State Sovereignty, National Union", to "National Union, State Sovereignty". However, the bill passed by the legislature on March 7, 1867, kept the original wording. Despite declining his suggestion, the legislature nonetheless entrusted Tyndale with designing the new seal. And Tyndale managed to (literally) twist the legislature's intent; he kept the words in the correct order on the banner, but the banner twists, so the word "Sovereignty" is upside down, arguably making it less readable.

Tyndale's seal features a bald eagle pitched on a rock carrying a shield in its talons and a banner with the state motto in its beak. Thirteen stars and thirteen stripes on the shield represent the original thirteen states of the Union. The date August 26, 1818, when Illinois's first constitution was adopted in Kaskaskia, appears along the bottom arc of the circle, and 1818, the year of statehood, displays on the seal below 1868, the year the current seal was adopted. This basic design has survived through several minor modifications since it was first conceived. The Illinois Secretary of State is still the keeper of the Great Seal of the State of Illinois. 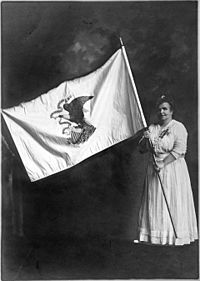 The contest was judged by a panel chaired by Lewis Stevenson, Illinois Secretary of State. They selected the design of Lucy Derwent. The flag became the official state banner on July 6, 1915, following its passage in the Illinois State House and Senate. Governor Edward F. Dunne did not sign the bill, but he did not veto it.

In the 1960s, Chief Petty Officer Bruce McDaniel petitioned to have the name of the state added to the flag. He noted that many of the people he served with during the Vietnam War did not recognize the banner. Governor Richard B. Ogilvie signed the addition to the flag into law on September 17, 1969, and the new flag was designed by Mrs. Sanford Hutchinson and became the official flag on July 1, 1970. 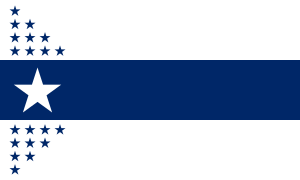 For Illinois's first 100 years of statehood in 1918, Wallace Rice, who designed Chicago's flag, designed a centennial flag for the state. It had three horizontal bands of equal width alternating white, blue, white. It was charged with 21 stars along the edge of the hoist. There were 10 blue stars in the upper white band and 10 in the lower white band, representing the 10 northern and 10 southern states at the time of Illinois' statehood in 1818. The center blue band had one large, white star for the state of Illinois itself.

All content from Kiddle encyclopedia articles (including the article images and facts) can be freely used under Attribution-ShareAlike license, unless stated otherwise. Cite this article:
Flag and seal of Illinois Facts for Kids. Kiddle Encyclopedia.