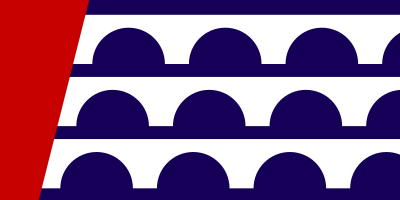 The flag of Des Moines, Iowa, was designed by Walter T. Proctor. Set on a blue background is a red vertical stripe along the hoist with the right side of the stripe angling inward toward the hoist and a white balance of three horizontal "bridges."

Although there is no documented symbolism for the red stripe, its creator indicated that the selection of the colors red, white and blue were to mirror the color scheme of the flag of the United States of America.

The three white "bridges" across the flag symbolize the Grand, Locust, and Walnut Street bridges at the Des Moines River.

Starting September 19th, 2016 the Grand Avenue bridge will be closed for demolition then subsequent rebuilding due to structural deficiencies, set to reopen at the end of 2017. The other bridges adjacent to the Grand Ave. bridge are scheduled for the same treatment in the following years. They will not be built in the same style, they will not have functional arch supports. Construction will be standard square/rectangle design with facade arches painted on the side.

In the same pane of the flag as the bridges, the blue background symbolizes the water of the Des Moines River.

In 1974, the Des Moines City Council had an open submission of proposed city flag designs. When Walter T. Proctor's design was adopted by the City Council on April 15, 1974, he formalized the importance of the Des Moines River Walnut, Locust, and Grand Street bridges to the city. The flag depicts the, in Proctor's words, "modern bridges" that connect the east and west sides of the city across a key geographical landmark in Des Moines: Des Moines River. Proctor believes these bridges symbolize the unity of the city otherwise divided by the river.

About the river and bridges

The river flows north/south along the east side of downtown is the center of city services (city hall, armory, library, police station). Des Moines is again developing community attractions around the River by building a multimillion-dollar urban riverwalk along the river, largely funded by Principal Financial Group.

All content from Kiddle encyclopedia articles (including the article images and facts) can be freely used under Attribution-ShareAlike license, unless stated otherwise. Cite this article:
Flag of Des Moines, Iowa Facts for Kids. Kiddle Encyclopedia.