Flag of Utah facts for kids

The flag of the State of Utah was adopted in February 2011 and consists of the seal of Utah encircled in a golden circle on a background of dark navy blue. It replaced a previous, albeit rather similar flag that had been in use since 1913. 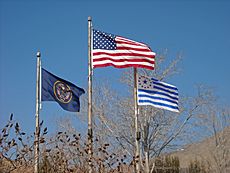 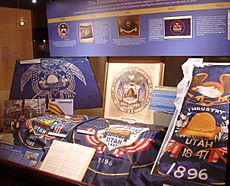 A display at the Utah State Capitol describing the history of the flag.

A bald eagle, the national bird of the United States, symbolizes protection in peace and war. The sego lily, the state flower of Utah, represents peace. The state motto "Industry" and the beehive represent progress and hard work. The U.S. flags show Utah's support and commitment to the United States. The state name "Utah" appears below the beehive. The date 1847 represents the year the Mormon pioneers entered the Salt Lake Valley, while 1896 represents the year that Utah was admitted as the 45th state to the Union.

Alternatively, the sego lily - a flowering plant that survives in the arid Great Basin climate - provided food to the early pioneer colony, helping the settlers survive the harsh winters after their arrival in the Salt Lake Valley. Thus it became the state flower. The eagle and flanking flags are also important symbols - Utah's is one of the few state flags to carry the American flag as part of the design. This is because the Mormon settlers were thought not to be loyal to the United States - one of the reasons statehood was not granted to Utah until nearly 40 years after the original settlements.

In 2001, the North American Vexillological Association surveyed its members on the designs of all 72 U.S. state, U.S. territorial and Canadian provincial flags. Utah's flag was ranked 58th out of the 72 flags. 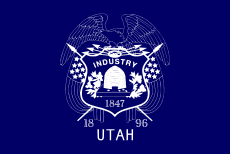 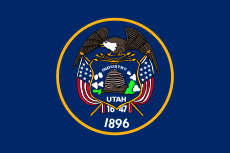 The flag's basic design uses the Seal of Utah which was adopted by the state legislature on April 3, 1896. The seal was designed by artist Harry Edwards, and has similarities with the seal of the Utah Territory. The state's first flag was created in March 1903 to be used at the Louisiana Purchase Exposition in St. Louis, Missouri. Heber M. Wells, the governor of Utah, asked the Utah State Chapter of the Daughters of the American Revolution to oversee the creation of a flag. On May 1, 1903, the governor and his delegation marched, under the new flag, in the parade of states. The flag was blue, with the state seal and the year '1896' hand-embroidered in white thread in the flag's center. Initially this flag was known as the "Governor's Flag" until Senate Joint Resolution 17 was passed by the legislature on March 9, 1911, making it the official state flag.

In 1912, the Sons and Daughters of Utah Pioneers ordered a custom made copy of the newly adopted flag to be presented to the battleship USS Utah, which was commissioned on August 31, 1911. When the flag arrived, the group discovered that the shield on the flag was in full color instead of white, and the manufacturer had added a gold ring around the shield. Rather than have the flag remade, Annie Wells Cannon introduced HJR 1 and the Utah legislature changed the law to allow the changes found on the 1913 version to become part of the official flag. Prior to being received by the Ship on June 25, 1913, the new flag was displayed at the state capitol in January 1913, then in the ZCMI windows on Main Street and at a ball held in honor of the flag.

During the 59th state legislative session in 2011, a Concurrent Resolution (HCR002) was adopted requiring flag makers to fix a mistake found on all current Utah state flags. The mistake originated in 1922 when a flag maker misplaced the year 1847, by stitching it just above the year 1896, instead of in its correct position on the shield. It is believed every flag made since 1922 used this flag as a model, and the mistake has been present for 89 years. Later that same 2011 session, House Bill #490 passed the legislature, making March 9 an annual Utah State Flag day.

Prior to Utah's admission to the Union, the Utah Territory used a flag somewhat resembling the one later used as a state.

Flag of the State of Deseret

All content from Kiddle encyclopedia articles (including the article images and facts) can be freely used under Attribution-ShareAlike license, unless stated otherwise. Cite this article:
Flag of Utah Facts for Kids. Kiddle Encyclopedia.