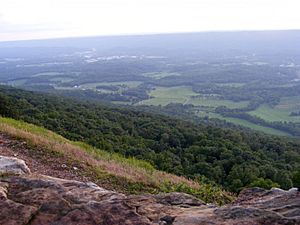 Flintstone is an unincorporated community in Walker County, Georgia, United States. Located in northwestern Georgia, Flintstone lies approximately 12 miles south of Chattanooga, Tennessee, 120 miles northwest of Atlanta, 135 miles southeast of Nashville, Tennessee, and 150 miles northeast of Birmingham, Alabama. Although Flintstone is unincorporated, it has a post office, with the ZIP code of 30725; the ZCTA for ZIP Code 30725 had a population of 3,456 at the 2000 census.

A post office called Flintstone has been in operation since 1891. The community was named for deposits of flintstone near the original town site.

Flintstone is also known as Chattanooga Valley, and the northern terminus of the community is the Tennessee-Georgia state boundary. Many residents commute to Chattanooga due to the city's physical proximity.

Geological features include the eastern slope of Lookout Mountain and Mission Ridge, as well as Chattanooga Creek and Rock Creek.

Flintstone is semi-rural, with pockets of subdivisions scattered throughout. It includes a very small business district complete with a bank, gas stations, hardware store, a couple of restaurants, a monument office, and other amenities.

Flintstone is included in the Fort Oglethorpe Quad of topographical maps published by the United States Geological Services.

Flintstone experiences about 210 sunny days, and 110 rainy days, with an annual rainfall of 54 inches with only 3–5 days of snowfall due to the warm temperatures and humidity.

In April 1977, Chattanooga Valley Elementary School (which at that time served grades K-8), burned in a fire that was believed to have been intentionally set. The main building was a total loss, but the junior high building (which housed grades 7-8), the gymnasium, and other structures were saved. The school was rebuilt and currently serves grades K-5. The original gym which survived the fire was eventually demolished. The building which housed grades 7 and 8 continued to be used as classrooms for many years, but is now used for storage.

All content from Kiddle encyclopedia articles (including the article images and facts) can be freely used under Attribution-ShareAlike license, unless stated otherwise. Cite this article:
Flintstone, Georgia Facts for Kids. Kiddle Encyclopedia.