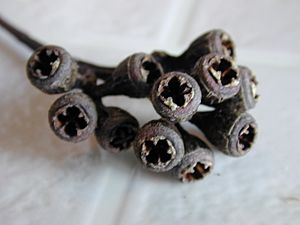 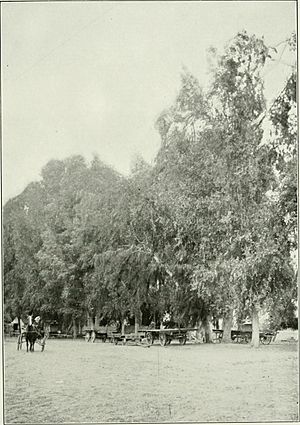 Eucalyptus rudis, commonly known as flooded gum or moitch, is a species of small to medium-sized tree endemic to coastal areas near Perth, Western Australia. The Noongar names for the tree are colaille, gooloorto, koolert and moitch. This tree has rough, fibrous bark on the trunk and large branches, smooth greyish bark above, lance-shaped to curved adult leaves, flower buds in groups of between seven and eleven, white flowers and bell-shaped, cup-shaped or hemispherical fruit.

In 1993, Ian Brooker and Stephen Hopper described two subspecies and the names have been accepted by the Australian Plant Census:

The tree is widespread from the Eneabba district (29° S. Lat.) southwards in the Darling Range, west central wheatbelt and high rainfall areas of south-west Western Australia commonly on watercourses, swampy ground or very occasionally on granite rock. Subspecies cratyantha only occurs from Mandurah and Pinjarra south and south-west to Cape Naturaliste.

This tree is often heavily attacked in spring by insects, including leaf miners, leaf blister sawflies and lerps. The crown regenerates in late spring and into summer.

The tree is relatively fast-growing with potential for remediation of land affected by moderate levels of salinity. Natural stands are used in the apiculture industry as a source of pollen producing a light amber honey. It is also being assessed as a fast-growing source of biomass for bioenergy and reconstituted wood products in the South West region. Historically it has been used as firewood but the wood also has potential for use as specialty timber. The heartwood is hard, cross grained and a yellow to light reddish brown colour. It has a green density is about kg/m3, and air-dried density about 775 kg/m3.

All content from Kiddle encyclopedia articles (including the article images and facts) can be freely used under Attribution-ShareAlike license, unless stated otherwise. Cite this article:
Flooded gum Facts for Kids. Kiddle Encyclopedia.