Flora is a city in Clay County, Illinois, United States. The population was 5,070 at the 2010 census.

Flora was founded by Samuel White. White was born September 10, 1831 in Warren County, Ohio. He and his family came to Clay County in 1852. During that time, he purchased 85 acres (34 ha) of land from the State of Illinois. His first wife, Sarah Ann Wall was born in 1833. Sarah died December 13, 1859 in Flora, and is buried in the family plot in Elmwood Cemetery. In December 1860, White married Helen M. Riggs in Flora.

The original town of Flora was laid out, surveyed and platted in February 1854 by Ethelred Nixon, County Surveyor; John Brown, Trustee for Songer, Camp & Company; and Samuel White. It embraced eighty-five acres of the west half of Section 25, Township 3 north Range 6 east. Samuel White who still owned the land, deeded one-half interest in forty acres to John Brown, Trustee, with a view of securing the town and depot. An effort had already been made to establish a town one mile west called Mooresville, where over 100 lots had been sold and some buildings done. After the collapse of that village, the principal house was moved to Flora, and was then known as the "Commercial House."

Samuel White also donated land to the City of Flora for several buildings and the city park. The City Park, at that time called the Public Square, is present day Library Park where Flora Public Library is located. White donated land for the 1st schoolhouse, the Baptist Church and parsonage. Land was also donated for streets and alleys of the original town of Flora. The city's founder died November 15, 1912 in Sterling, Colorado and was returned to Flora for burial in the family plot at Elmwood.

From "Flora, Illinois - Founded 1854" compiled by Flora Resident, Jeanie Briscoe. The book also contains historic information about the B & O railroad, the history of various buildings, and obituaries of some of Flora's early citizens.

There were 2,127 households out of which 29.0% had children under the age of 18 living with them, 47.6% were married couples living together, 11.3% had a female householder with no husband present, and 37.7% were non-families. 34.3% of all households were made up of individuals and 19.2% had someone living alone who was 65 years of age or older. The average household size was 2.28 and the average family size was 2.92.

In September 1960, Flora was named "Ford Town USA" and some 1500 vehicle owners were supplied with a new Ford car or truck to drive during that week.

Flora's main industry is agriculture, although there are companies located in Flora that employ several hundreds. Flora is surrounded by a gently rolling countryside, with approximately 80-85% of it dedicated to farming and livestock. 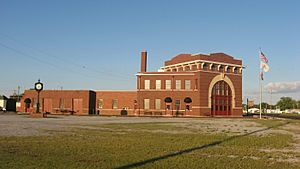 The Flora B&O Depot was built in 1872 with generous help from local citizens. It served the City of Flora until 1916, when it was destroyed by fire.

In 1916-1917, a new three-story brick depot was built. This building was a huge part of the economic life of the community during those early years. In the 1920s, the railroad employed half the wage earners in Flora. In 1924, three hundred employees worked at the local station.

When the depot was completed in 1917, it contained three floors. The main floor was used for passengers. It had a large waiting room with a baggage room and restrooms. The Western Union office, yard office, mailroom and ticket office were also located on this floor.

The third floor contained large offices. Later, these offices became one social room. It was here that railroad employees and their families held potluck dinners and socials. Not only was the depot a hub of transportation and commerce, it was a center for much of the social life in the community.

In the 1950s, as roads improved, cars became the chief means of transportation. Travelers no longer looked to trains as the primary source of transportation. The depot became less important to the community and the days of hosting 12 passenger trains, daily passing through Flora, became a fond memory.

In 1998, the Flora B&O Depot was named one of three sites in Clay County on the National Register of Historic Places. With this recognition and the interest of many citizens of the community, the Flora Community Development Corporation (FCDC) purchased the depot from CSX Railroad.

More history, rent/leasing information, and events can be found on their website.

In 1987 a group of Flora officials formed the so-called "Barbed Wire Choir" and recorded a music video in an attempt to land a state prison. [1] The song featured several city officials, including the mayor, asking then-Gov. Jim Thompson "Is we is or is we isn't/gonna get ourselves a prison." After being shown on local TV stations, the video gained the attention of national programs such as MTV, Good Morning America and The Late Show Starring Joan Rivers. Flora ultimately lost its bid to host the new prison.

All content from Kiddle encyclopedia articles (including the article images and facts) can be freely used under Attribution-ShareAlike license, unless stated otherwise. Cite this article:
Flora, Illinois Facts for Kids. Kiddle Encyclopedia.