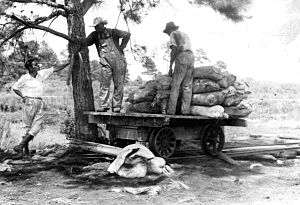 Florahome is an unincorporated community in Putnam County, Florida, United States, located on State Road 100. The town was established in 1899 by the Georgia Southern and Florida Railway. The streets are laid in a grid system. Streets north and south are named for trees or shrubs. Streets east and west are named for states or provinces. Early in the town's history, it was surrounded by swamps. These were drained when canals were dredged by the Etoniah Canal and Drainage Company. Florahome was also once an island and was drained of all its water to make way for crops, animals, and homes. The town is built upon a sandy hill rising from the swampy areas.

All content from Kiddle encyclopedia articles (including the article images and facts) can be freely used under Attribution-ShareAlike license, unless stated otherwise. Cite this article:
Florahome, Florida Facts for Kids. Kiddle Encyclopedia.