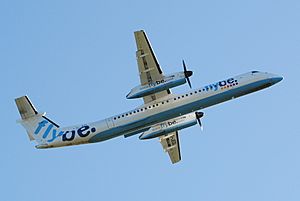 Flybe Group PLC (Known as flybe) was a low-cost regional airline group in Exeter, Devon, England. It had over 180 routes to 65 European airports and was Europe's biggest regional airline. Over 6.7 million passengers travelled with them during 2010. The airline was on the London Stock Exchange (LSE: FLYB), and payed around 2,800 people.

All content from Kiddle encyclopedia articles (including the article images and facts) can be freely used under Attribution-ShareAlike license, unless stated otherwise. Cite this article:
Flybe Facts for Kids. Kiddle Encyclopedia.