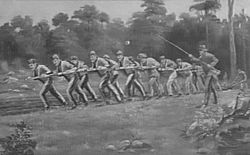 Forced labor includes all forms of slavery, and related practices including debt slavery, serfdom, human trafficking and labor camps. It is any work or service a person is forced to do against their will. It usually includes a threat of some form of punishment. The International Labour Organization had defined Forced labor as "all work or service which is exacted from any person under the menace of any penalty and for which the said person has not offered himself voluntarily." This was in the Forced Labour Convention, 1930 (No. 29). Exceptions included work done while serving in a military organization, community service when the work serves the community, and anyone convicted and serving a prison sentence. Convict labor must be supervised by public officials. The convention does not allow convicts to be under the supervision of private individuals, companies or organizations.

There are over 29 million people living as slaves today.

All content from Kiddle encyclopedia articles (including the article images and facts) can be freely used under Attribution-ShareAlike license, unless stated otherwise. Cite this article:
Forced labor Facts for Kids. Kiddle Encyclopedia.