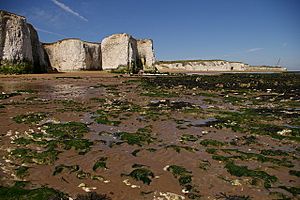 Foreness Point is a low headland on the coast of Kent in England. It extends a short distance into the entrance of the Thames Estuary, on the north coast of Thanet, between Palm Bay in Cliftonville and Botany Bay in Broadstairs. Off the point there is a reef, exposed at low tide, known as Long Nose Spit, where common periwinkles are collected by the public as a food item. There is a water treatment plant on the headland.

During the Second World War there was a Chain Home Low radar station at Foreness.

All content from Kiddle encyclopedia articles (including the article images and facts) can be freely used under Attribution-ShareAlike license, unless stated otherwise. Cite this article:
Foreness Point Facts for Kids. Kiddle Encyclopedia.