Kids Encyclopedia Facts
This page is about the island in the River Thames. For the island formerly known as Formosa, see Taiwan. 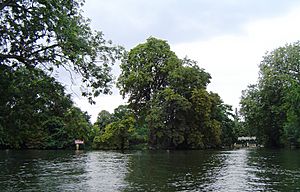 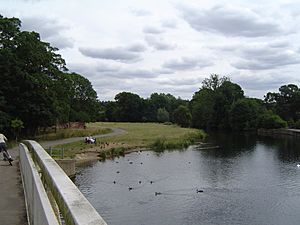 From the bridge onto Formosa Island

Formosa Island is an island in the River Thames in England at Cookham Lock near Cookham, Berkshire, with two smaller adjacent islands.

The island is one of the largest on the non-tidal river Thames with 50 acres (20 ha) of woodland. It can be reached by footbridge from Cookham. It is between two of the four channels in the river at Cookham, the one closest to Cookham was once the mill stream to a paper mill at Cookham. The one on the other side leads to Odney Weir. The adjacent Mill Island has the lock channel on the other side. Beyond the lock channel is Sashes Island and the channel furthest from Cookham is Hedsor Water, the original navigation channel, which was blocked by the weir in 1830 when the lock was opened, causing loss of trade to then owner Lord Boston.

All content from Kiddle encyclopedia articles (including the article images and facts) can be freely used under Attribution-ShareAlike license, unless stated otherwise. Cite this article:
Formosa Island Facts for Kids. Kiddle Encyclopedia.