Forreston is an unincorporated community in Ellis County, Texas, United States. It lies on U.S. Route 77 eight miles south of the county seat of Waxahachie. The population was estimated to be 238 in 2008, but Forreston is not listed in the 2010 census.

Denver Pyle, a supporting actor in many roles, including CBS's The Doris Day Show and The Dukes of Hazzard, is interred in an unmarked grave at Forreston Cemetery just south of the community off Highway 77.

James "Big Jim" Bynum of Forreston, held, along with Jack Favor of Fort Worth, the 2.2-second rodeo record for bulldogging a steer. 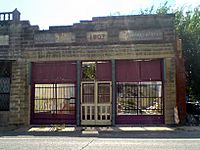 Another long closed business in Forreston 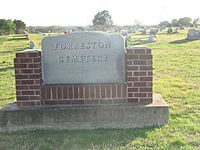 Forreston Cemetery is located south of the community.

The roots of Forreston date to 1843, when the area was known as Howe's Settlement, named for an early settler in the region. In the middle to late 1840s, the community was renamed Chambers Creek. It received its first post office in 1846. It initially served as the original county seat of Navarro County until 1850, when the organization of Ellis County placed the town within the new county.

From the early 1850s to the late 1880s, Chambers Creek remained a small farming community, providing a school and a church for local residents and farmers. In 1890, the Missouri-Kansas-Texas (KATY) Railroad was built through the area, and businesses began to spring up along the tracks. The community was renamed Forreston, after Carr Forrest, a local landowner who served as the first postmaster and donated the land on which the new rail depot was built. By the 1940s, Forreston had three cotton gins, several businesses, and a population of 350. Throughout the 20th century the town remained a shipping point for local farming and commerce.

The population declined; by 2000, it had only some two hundred residents.

Forreston was featured in the March 1999 issue of Texas Monthly in the article entitled "The Best of Small-Town Texas". In August 2007, Forreston was featured in "Shop Vintage with Ken Weber" in the publication, D Magazine. The spread was encouraged by Bon Ton Vintage, a shop founded in 1984 by retired jazz musicians Barbra and John Kauffman which claims to have the "largest collection of vintage clothing in Texas".

All content from Kiddle encyclopedia articles (including the article images and facts) can be freely used under Attribution-ShareAlike license, unless stated otherwise. Cite this article:
Forreston, Texas Facts for Kids. Kiddle Encyclopedia.