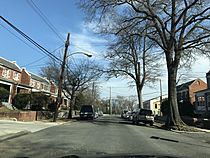 Fort Totten is a neighborhood located in Ward 5 of Northeast Washington, D.C.

Fort Totten is located between Riggs Road N.E. to the north, Bates Rd N.E., Allison Street N.E., and the southern end of Fort Totten Park to the south, the Washington Metro Red Line tracks to the east, and North Capitol Street NW to the west.

Residents of Fort Totten not only have access to Fort Totten Park, but also to the Washington Metropolitan Branch Trail as well which runs all the way from the Silver Spring Metro Station to Washington Union Station in the Capitol Hill neighborhood of Washington, D.C. Residents who live in the Fort Totten neighborhood have access to the Fort Totten Metro Station, which has primarily been served by the Red Line since the station first opened on February 6, 1978, as well as the Green Line which has been serving the station since December 11, 1993, and the Yellow Line, which has been serving the station since May, 2006. In addition to these Metrorail Lines, residents of Fort Totten are also served by many Metrobus routes as well.

The neighborhood takes its name from the Civil War fort located at the top of the hill. It was built in 1861 and completed in 1863 to provide protection to the capital during the civil war. The fort is named for Joseph Gilbert Totten, a general in the War of 1812.

The earthworks of the main fort are still clearly visible today, including the surrounding ditch, ramparts, and the walls of the two magazines within the fort. The smaller Totten Battery, which lies 1000 feet to the North, and the connecting rifle trenches can be easily seen as well. The park itself is home to a number of picnic benches as well as a Civil War centennial plaque marking the main entrance to the remains of the fort.

All content from Kiddle encyclopedia articles (including the article images and facts) can be freely used under Attribution-ShareAlike license, unless stated otherwise. Cite this article:
Fort Totten (Washington, D.C.) Facts for Kids. Kiddle Encyclopedia.