Fossil Ridge Park is a public park in Sherman Oaks, Los Angeles County, California. It is owned by the Santa Monica Mountains Conservancy.

It is located on the corner of Mulholland Drive and Beverly Glen Boulevard in Sherman Oaks, a neighbourhood of the city of Los Angeles.

The idea of the park was conceived in 1986. It was dedicated five years later, in 1991. Actor Ed Asner and local politician Zev Yaroslavsky spoke at the dedication. However, it was only completed and properly opened in late 1995.

The initial parcel of land (56 acres) was donated by Kenneth Kai Chang, the real estate developer who created Mulholland Estates, to the Santa Monica Mountains Conservancy. Moreover, Chang later agreed to fund some of the trails and a visitor center.

The overall landmass is 110 acres (45 ha). It contains many fossils of marine animals. The area is protected, and rocks with fossils on them cannot be moved.

Shown is one of several slabs of diatomaceous sandstone with abundant fossil fish (perhaps a species of herring) collected in the 1970s from the area now underneath the Mulholland Estates security gate/access road. Many hundreds if not thousands of these 5 1/2 inch fish must have encountered an area of low oxygen content and all died at once. 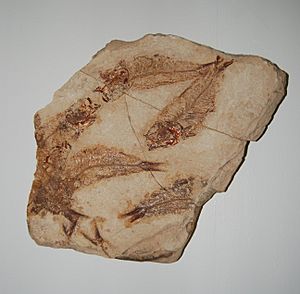 All content from Kiddle encyclopedia articles (including the article images and facts) can be freely used under Attribution-ShareAlike license, unless stated otherwise. Cite this article:
Fossil Ridge Park Facts for Kids. Kiddle Encyclopedia.