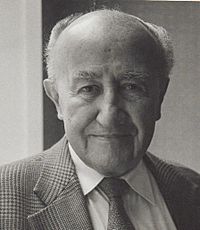 François-Yves Guillin (7 September 1921 – 18 October 2020) was a French resistance fighter, doctor, and historian. He was born in Orléans, France. In June 1941, Guillin began his medical studies. He left school the following year to join the French Resistance and began working as a secretary under the pseudonym Mercure during World War II.

After the War, Guillin resumed his studies and pursued a career as a rheumatologist. Towards the end of his career, he pursued a doctorate in history. He defended a thesis on General Delestraint in 1992, and it was published in 1995. He was a Knight of the Legion of Honour.

All content from Kiddle encyclopedia articles (including the article images and facts) can be freely used under Attribution-ShareAlike license, unless stated otherwise. Cite this article:
François-Yves Guillin Facts for Kids. Kiddle Encyclopedia.