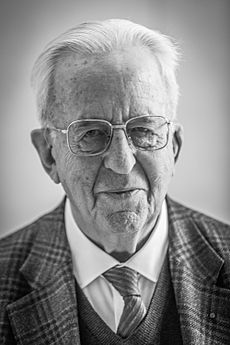 François Amoudruz (7 September 1926 – 21 July 2020) was a member of the French Resistance during World War II. He was born in Albertville, France.

Amoudruz entered the law school in Clermont-Ferrand. However, on 25 November 1943, the Gestapo raided the school and Amoudruz was taken as a hostage after having just turned 17. In December 1943, he was held captive at the Royallieu-Compiègne internment camp. He left the camp on 17 January 1944, being deported to the Buchenwald concentration camp. He was eventually locked up at the Flossenbürg concentration camp on 23 February 1944.

Amoudruz escaped during a death march in April 1945, but was captured and sent back to camp. However, he would be freed by Allied Forces on Victory in Europe Day. He returned to France on 24 May 1945.

He was also a member of the European Centre on Resistance and Deportation and the Concours national de la résistance et de la déportation.

All content from Kiddle encyclopedia articles (including the article images and facts) can be freely used under Attribution-ShareAlike license, unless stated otherwise. Cite this article:
François Amoudruz Facts for Kids. Kiddle Encyclopedia.