Francis Octavius Grenfell, VC (4 September 1880 - 24 May 1915) was an English soldier of British Army. He received the Victoria Cross. The cross is the highest award for bravery against the enemy, and can be awarded to British and Commonwealth forces.

Grenfell was born on 4 September 1880. His parents were Sophia and Pascoe Du Pré Grenfell. He was one of fifteen children. He had a twin brother, Riversdale Grenfell. He was also in the 9th Lancers and killed in action in September 1914. Admiral John Pascoe Grenfell was their grandfather. Field Marshal Francis Grenfell, 1st Baron Grenfell was their uncle. An older brother, Lieutenant Robert Septimus Grenfell, 21st Lancers, was killed in a cavalry charge during the Battle of Omdurman in 1898. Three other brothers, Cecil Grenfell, Howard Maxwell Grenfell and Arthur Morton Grenfell all reached the rank of Lieutenant Colonel in the British Army. A cousin, Lieutenant Claude George Grenfell was killed at Spion Kop during the Boer War. Two other cousins Julian Grenfell (the poet) and his brother Gerald William Grenfell were killed in the First World War.

Grenfell was a representative cricket player at Eton collage. He joined the army in 1900 and first served in the Second Boer War in the King's Royal Rifle Corps. 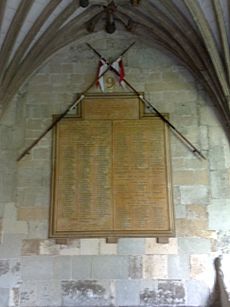 Memorial board in the corridors of Canterbury Cathedral to the officers and men of the 9th (Queen's Royal) Lancers who died during the First World War. 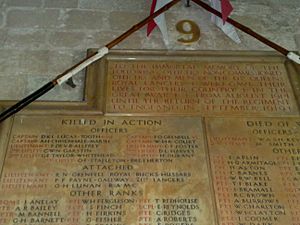 Detail of the memorial showing the names of the Grenfell twins.

Later, he served in First World War in the 9th Lancers, British Army. He was 33 years old and a Captain, when he was awarded the VC for the following brave deed.

On 24 August 1914 at Audregnies, Belgium, Captain Grenfell rode with the regiment in a charge against a large body of unbroken German infantry. Damages of friendly army were so heavy, and Grenfell was left as the senior officer. When he was reorganizing the regiment behind a railway bank, he was twice hit and severely wounded. But once he was asked to save the guns by Major Ernest Wright Alexander of the 119th Battery, Royal Field Artillery, Grenfell and some volunteers helped to push the guns out of range of enemy fire, under a shower of bullets. London Gazette on 16 September 1914 wrote as follows:

For gallantry in action against unbroken infantry at Andregnies, Belgium, on 24th August 1914, and for gallant conduct in assisting to save the guns of the 119th Battery, Royal Field Artillery, near Doubon the same day.

He was killed in action on 24 May 1915 and is buried in the Vlamertinghe Military Cemetery.

His Victoria Cross is displayed at the Regimental Museum of the 9th/12th Royal Lancers housed in Derby Museum and Art Gallery, Derby, England.

All nine of the Grenfell brothers were expert polo players. Francis and his brother Riversdale Grenfell were regarded as the best in the family. Francis was rated at an 8 goal handicap. The twin brothers were on the Ranelagh team that won the American Open. And they were on the team Freebooters, alongside Leopold Christian Duncan Jenner and the Duke of Roxburghe, that won the Hurlingham Champion Cup.

All content from Kiddle encyclopedia articles (including the article images and facts) can be freely used under Attribution-ShareAlike license, unless stated otherwise. Cite this article:
Francis Octavius Grenfell Facts for Kids. Kiddle Encyclopedia.