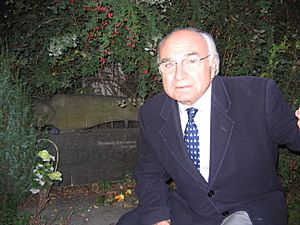 He won the Premio Nacional de las Letras Españolas in 1999. Brines was elected to the Real Academia Española on 19 April 2001.In 2020, he was awarded the Miguel de Cervantes Prize.

He taught Spanish literature at Oxford University and Cambridge University.

Brines died of problems caused by hernia surgery at a hospital in Gandia, Spain on 20 May 2021, aged 89.

All content from Kiddle encyclopedia articles (including the article images and facts) can be freely used under Attribution-ShareAlike license, unless stated otherwise. Cite this article:
Francisco Brines Facts for Kids. Kiddle Encyclopedia.