Francois Peron National Park is a national park on the Peron Peninsula in Western Australia, 726 km north of Perth, and located within the boundary of the Shark Bay World Heritage area. The nearest towns to the park are Denham, which is found on the southern edge of the park and Carnarvon which is found about 80 kilometres (50 mi) to the north. 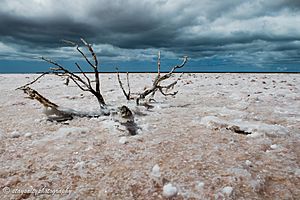 Aboriginal Australians were the initial inhabitants of the area and have been living there for over 26,000 years. The local peoples who speak the Malgana language call the area Wulyibidi.

It is named after the French naturalist and explorer François Péron who was the zoologist aboard Nicolas Baudin's 1801 and 1803 scientific expeditions to Western Australia, and is situated within the bounds of the earlier pastoral lease of the Peron Station.

Locations from the French exploration era include:

A pearling camp was established on the peninsula at Herald Bight in the 1880s and the remains of the shells can still be found along the beach.

Used as a sheep station from the early 1900s onwards the station was sold to the state government in 1990.

It is adjacent to and surrounded by the Shark Bay Marine Park to the west, north and east, and by the Denham to Monkey Mia road to the south.

Picnic, boat launching and camping areas along the west coast of the Peninsula include: 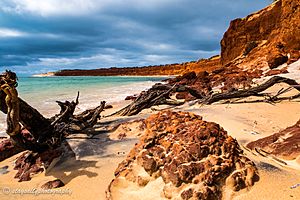 All content from Kiddle encyclopedia articles (including the article images and facts) can be freely used under Attribution-ShareAlike license, unless stated otherwise. Cite this article:
Francois Peron National Park Facts for Kids. Kiddle Encyclopedia.