Denham is the administrative town for the Shire of Shark Bay, Western Australia. At the 2006 census, Denham had a population of 607.

Located on the western coast of the Peron Peninsula 831 kilometres (516 mi) north of Perth, Denham is the westernmost publicly accessible town in Australia, and is named in honour of Captain Henry Mangles Denham of the Royal Navy, who charted Shark Bay in 1858. Today Denham survives as the gateway for the tourists who come to see the dolphins at Monkey Mia, which is located 23 kilometres (14 mi) northeast of the town. The town also has an attractive beach and a jetty popular with those interested in fishing and boating. 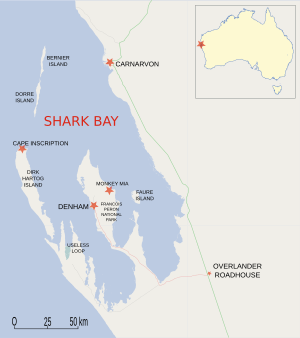 The Denham area was the first part of the Australian mainland discovered by European sailors. On 25 October 1616, Dutch explorer Dirk Hartog and crew came unexpectedly upon "various islands, which were, however, found uninhabited." He made landfall at an island now called Dirk Hartog Island off the coast of Shark Bay. Hartog spent three days examining the coast and nearby islands. He named the area Eendrachtsland after his ship, but this name has not endured. Finding little of interest, Hartog continued sailing northwards charting this previously undiscovered coast to about 22° South. In 1696 the Dutch explorer Willem de Vlamingh landed on the island. Later explorers included William Dampier, and the Frenchmen Freycinet, Hamelin and Baudin in the early 19th century.

The coast remained uninhabited by Europeans until the middle of the 19th century. The first pearls found in Western Australia were discovered in Shark Bay in 1854 by a Lieutenant Helpman, the so-called 'Admiral of the Swan River Navy', who found the dense beds of pearl-shell oysters that are abundant there.

The tourist industry - which functions mainly from April until September - witnesses an influx of over 250,000 people passing through the Shire on the main North West Coastal Highway of which approximately 110,000 actually come into the communities including Denham and Monkey Mia. The 150 km stretch of road linking the highway with Denham is known as World Heritage Drive.

A number of tour operators have land and water based operations using both Monkey Mia and Denham as their base.

There is an all-weather airstrip, Shark Bay Airport (also known at times as Denham Airport), which has Skippers Aviation operating regular services as the main tourist fly in location for Denham and Monkey Mia.

Denham has a semi-arid climate typical of most of central Western Australia. Summers are warm but not as hot as areas further inland due to coastal influence. The majority of Denham's rainfall falls in winter due to cold fronts moving in off the Indian Ocean, however the town receives far less rainfall from these systems than areas further south such as Geraldton and Perth. The period from September to March is largely rainless apart from possible erratic thunderstorms or influence from tropical cyclones.

Little Lagoon at the north edge of Denham

All content from Kiddle encyclopedia articles (including the article images and facts) can be freely used under Attribution-ShareAlike license, unless stated otherwise. Cite this article:
Denham, Western Australia Facts for Kids. Kiddle Encyclopedia.