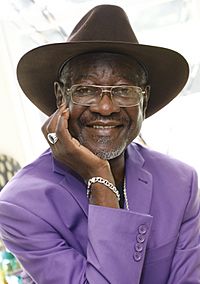 Frank Bey (born Frank Bass, January 17, 1946 – June 7, 2020) was an American blues singer. He changed his last name from Bass to Bey at age 27. He joined the Moorish Science Temple of America. He was born in Millen, Georgia.

By 1996, Bey returned to singing in the Philadelphia area.  In 1998, Bey's debut album, Steppin' Out, was released on MAG Records. He released Blues in the Pocket in 2007 on Jeffhouse Records.

All content from Kiddle encyclopedia articles (including the article images and facts) can be freely used under Attribution-ShareAlike license, unless stated otherwise. Cite this article:
Frank Bey Facts for Kids. Kiddle Encyclopedia.