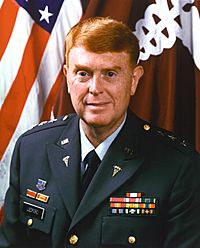 Frank Finley Ledford Jr. (April 22, 1934 – May 15, 2019) was an American orthopedic surgeon. He served as the 37th Surgeon General of the United States Army from 1988 to 1992. He reached the U.S. Army rank of lieutenant general. He also held positions as a clinical professor at the Uniformed Services University of the Health Sciences (USUHS). He was born in Jacksonville, Florida.

All content from Kiddle encyclopedia articles (including the article images and facts) can be freely used under Attribution-ShareAlike license, unless stated otherwise. Cite this article:
Frank F. Ledford Jr. Facts for Kids. Kiddle Encyclopedia.