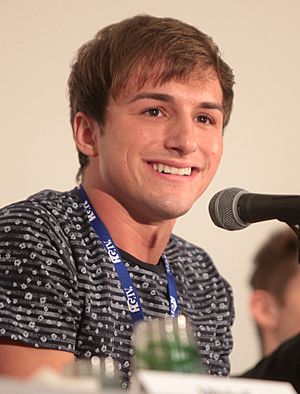 Lucas Cruikshank, the creator of Fred

Fred Figglehorn is a fictional character made up by Lucas Cruikshank, a teenager from Columbus, Nebraska.

Fred Figglehorn was first recorded in 2005 and first seen on YouTube in 2006 as a five year old boy. Cruikshank makes his voice sound higher pitched for the Fred character. By April 2009, Fred's YouTube subscription page had over one million subscribers, making him the most subscribed person on YouTube. His peak amount of subscribers was over 3,000,000. The amount has declined since he started working on his films and TV show due to the hiring of writers to make his scripts for him, thus making his videos less funny. As of July 27, 2012, his channel has 1,910,093 subscribers.

In February 2009 Cruikshank worked with Nickelodeon acting in an episode of iCarly and creating the movies Fred: The Movie, Fred 2: Night of the Living Fred and Fred 3: Camp Fred. He also worked with them, creating his own TV show called Fred: The Show.

The Fred Figglehorn franchise has 3 web shows (FЯED, Figgle Chat, and It's FЯED!), 3 movies (FЯED: The Movie, FЯED 2: Night of the Living FЯED and Fred 3: Camp Fred), and a television show (FЯED: The Show). It also has 2 albums (It's Hackin' Christmas with FЯED! and Who's Ready to Party?). It has many types of merchandise, including T-shirts, a talking doll, and many other products.

An unpopular, hyper teenage boy named Fred Figglehorn has a crush on a girl named Judy, but is sad to see her singing a romantic duet with his enemy Kevin during a music class. After this, Fred wants to sing a song with Judy, but after trying to sneak his way into her house, he discovers that she has moved. So Fred goes on a journey to find Judy's new house. While looking, Fred runs into different characters, including a talking deer, a lost childhood friend who had disappeared in the forest years earlier, a neighborhood girl named Bertha who's friends with Fred, and a boy with a personality opposite to his own named Derf.

When he arrives at Judy's home, he discovers that she is hosting a party to which he was never invited. He is bullied by her guests who are bullies of him for his poor social status at school and strange personality. After vomiting on Judy's party dress, Fred leaves the house. He is angry to find that Kevin has posted a video of him vomiting on Judy online, so he decides to throw a party of his own and not invite anybody to get revenge. In order to trick others into believing that he has had a spectacular house party, Fred invites Bertha to his house where they dress up mannequins in different outfits and play around. After Fred edits the video of the fake party, he posts it on the internet, where his schoolmates watch it and believe that Fred and Bertha actually had a really good party. After watching the video, different students at Fred's school say how awesome Fred and Bertha are (except Kevin, who claims the party was "lame"). Some students say they actually went to the party. Soon, Judy visits Fred's house and asks if the two may sing together, and Fred accepts the request.

In school, Fred finds out his music teacher, who had trouble hearing, has been replaced by Mr. Devlin. Mr. Devlin cleans up and throws away a hearing aide, which is suspicious. While walking home with his friend, Bertha, he sees a girl, Talia following them. Fred thinks he is being stalked, so he runs home. Later, Fred notices Mr. Devlin is his new neighbor. Fred is now afraid of Mr. Devlin, thinking he may be a vampire.

At school, Devlin asks everyone to join a musical community. Fred thinks that Devlin is trying to turn everyone into a vampire by having them take his lessons, and everyone is joining. That night, Fred spies on him and sees him burying what he believes is a body. Meanwhile, Talia vanishes, making him think she was a ghost. Kevin's mom then invites them to a party. It is then found out that Talia is Kevin's sister. The next day, Mr. Devlin, takes Fred's mom on a date. This worries Fred.

Fred asks Bertha to help prove Mr. Devlin is a vampire. Fred and Bertha spy on Mr. Devlin and Fred's mom at a restaurant. Mr. Devlin orders a bloody steak making Bertha more suspicious. Later that night, Fred falls from his window because Mr. Devlin sees him as he is trying to get away. Later, Fred goes around and puts up crucifixes to fend off Devlin, as vampires hate all things holy. Derf tells Fred to face his fears and defeat Devlin, so Fred buys garlic sauce. At the piano recital that night, Fred squirts the garlic sauce on everyone, including Talia.

Afterwards, Mr. Devlin invites him to his house for dinner so that they can "bury the hatchet". Fred sets up a live video stream from his phone so he can prove that Devlin is a vampire. Inside Devlin's house, Fred discovers a secret butchers' room behind a wall filled with meat and bones. Devlin creeps in with a long knife and a tall head-dress, scaring Fred. Fred then drops his phone into a pot of boiling liquid. The video freezes on Devlin. This image of Devlin in his headdress makes everyone who sees it think that he is a vampire. But after Devlin talks about his weird hobbies, Fred now begins to like Devlin.

Everyone at school sees his video, so they believe that Devlin is a vampire, too. He runs to Devlin's house to apologize but Devlin is too depressed to answer. Mr. Devlin gets fired and says that he will have to sell his house and move. Fred feels guilty and tries to fix things by making them think he is the vampire. Bertha and Talia both help, as Talia reveals how much she hates her brother. Kevin and his friends go to Devlin's house because they think he has Talia. Devlin tells them that vampires are not real, but Bertha comes out and says, "Vampires are real, but it's not Devlin. It's him!" Then, Fred walks out of the garage carrying Talia, threatening to turn her into a vampire too. Bertha makes Kevin stab Fred, and he gets sprayed with fake blood. Devlin sees Fred and accepts his apology. Devlin says he quit his job and sold his house of his own choice. Then, as Fred's mom and Devlin are going out for dinner, Fred looks in the mirror and sees that Mr. Devlin has no reflection. This means he was a vampire after all, and Fred screams in terror as the movie ends.

There is a third Fred film called Fred 3: Camp Fred. It was shown on Nickelodeon on July 28, 2012. Fred is stuck at Camp IWannapeepee as his mom signed him up for the wrong camp as he quickly befriends two campers as they must win this year's Summer Camp Games and beat Camp Superior, where Kevin is a camper.

FЯED: The Show (where Mr. Figglehorn (Fred's abusive imaginary/make-believe father) (played by John Cena) didn't appear), is a Nickelodeon show starring Lucas Cruikshank as Fred. A preview aired on January 16, 2012 and another aired on February 20, 2012. The show itself was aired the same day as the second preview. The show came to production after the success of Fred 2: Night of the Living Fred. So far, 18 episodes have aired and had to stop production for the release for the third film, but new episodes will air on July 30, 2012.

Fred is the original web show Fred started out with. There are 4 seasons. Each one seems to have a kind of different style than the one before. In Season 1, Fred has a blue shirt. In Season 2, his shirt is red (because his grandma put a red sock in the laundry and the color ran). In Season 3, his shirt somehow becomes blue again. Season 4 is in HD and features Fred in many different places besides his house.

Figgle Chat is a talk show series Fred made where he interviews special guests (such as "Barack Obama", Hunter Hunterson, and Perez Hilton).

It's Hackin' Christmas with Fred

Who's Ready to Party?

All content from Kiddle encyclopedia articles (including the article images and facts) can be freely used under Attribution-ShareAlike license, unless stated otherwise. Cite this article:
Fred Figglehorn Facts for Kids. Kiddle Encyclopedia.